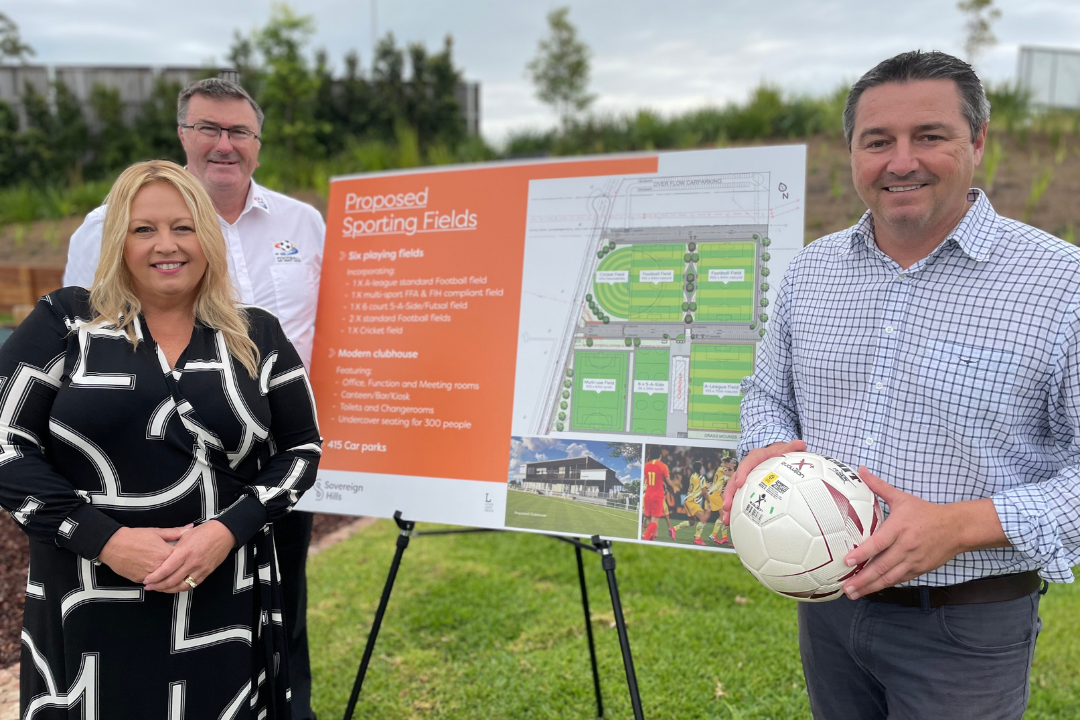 A Coalition commitment of $5 million to help create a world-class football facility at Sovereign Hills has been announced.

The sporting facility will include five soccer fields, including an A-league international standard field, and stadium stated Member for Cowper Pat Conaghan MP.

“Which will bring soccer players from around the country and world to Port Macquarie, but more importantly will give these facilities which have been desperately needed to football,” Mr Conaghan announced.

Port Macquarie-Hastings Council has budgeted $15 million for the project - which incorporates a clubhouse, lighting, synthetic fields, critical drainage and parking - and, all going to plan, would proceed to the tender phase after the 2022 federal election.

Mayor Peta Pinson said the region was “starving for sporting fields” as more families relocated to the region.

“Our demographic is changing. Sport is so important for their wellbeing and development,” Mayor Pinson shared.

“We’re looking forward to delivering what will be in the future a fabulous sporting arena for people of many sports.”

The football fields will be situated within the SovereignHills master planned community’s footprint, to the north of St Joseph’s Regional College.

Developer Lewis Land Group (LLG) is currently preparing the soil levels beneath the future facility, ahead of council calling for and successfully awarding a project tender.

“Today’s announcement is exciting news for football, and all sports, for not only the growing Sovereign Hills community but the wider Hastings and Mid North Coast,” LLG Head of Development Michael Long said.

“Sport is critical to the development of a healthy, active community and we can’t wait to see the long-held vision for the region’s premier sporting precinct become a reality.”

The sport’s local governing body for clubs between Bulahdelah and South West Rocks, Football Mid North Coast, has been a championing the project and plans to utilise the facility as the region’s new home of football.

“There’s 7,000 kids in our area who will benefits from this and I know a stadium like this will increase this number to around 10,000 kids,” shared FMNC Chairman Lance Fletcher.

The facility will also serve as a base for high performance soccer teams and has the potential to be a regional training base ahead of the 2032 Brisbane Olympics.

More pressingly, the facility would provide local grassroots sport with an alternative playing surface as it faces another soggy start to the season.

“The kids are looking for that continuity of being able to play every weekend without interruption,” Mr Fletcher added.

If you would like to join our growing community, our next land release is coming soon.
Visit Land Releases

Be among the first to learn about our upcoming land releases and community news.